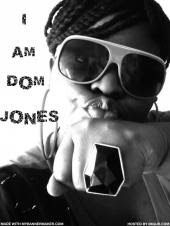 I Am Dom Jones is an internationally known poet from the Youth Speaks camp who began writing songs as a little girl singing in church. In 2006 she added rap to her repertoire and the rest is history. "She has performed on stages alongside Mos Def, Talib Kweli, Goapele, Dead Prez, The Attik, Los Rakas, League 510, Siaira Shawn, and even in front of President Barack Obama." I Am Dom Jones' latest offering is the mixtape, Champion.

Champion is fun, fresh, and familiar. It can get serious, as displayed in the beautiful letter, Dear Tatiana, a song written to the late Oscar Grant's daughter. Dom shares the pain of losing her father at an early age to cancer, and also shares her fears and hopes that Tatiana’s legacy not be shrouded by the death of Grant, her father.

My favorite track, What Goes Around , features one of my favorite local singers, Siaira Shawn and poet, Tiara Phalon. Dom is vocally stronger and the mix of the three-blended yet distinct-produce a song that's cleverly crafted.