Guava Sense - May 28 at the Brick and Mortar, SF

Rapper and music promoter Ben Senseless will perform at Brick and Mortar on May 28, 2017 with Int'l Hay Sús, Jordan Garrett, Cherokee and John Tae, and Death Amphetamine.

It's been a busy month for Senseless who DJ'd and performed at the 1st annual Taste of Oakland hosted by D'Wayne Wiggins, and for the unveiling of the Lincoln Square Park basketball courts provided by the Kevin Durant Charity Foundation and the Good Tidings Foundation.

Catch the Oakland rapper in his true element on Sunday, May 28. Buy tickets here. 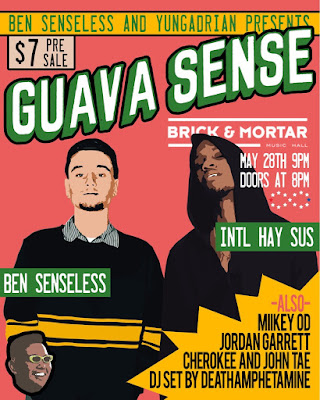