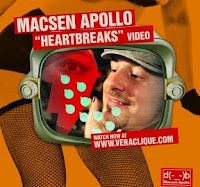 Macsen Apollo is proud to announce his first solo single “Heartbreaks”, off the upcoming album “Matters of the Heart”.

Macsen Apollo, out of Oakland, California has made a name for himself through his long-time rap career. As part of the V.E.R.A. Clique the MC has released two group albums to date and finally started working on his first solo effort in 2010. He has worked with well-known artists such as D' Wayne Wiggins of Tony Toni Tone, Joe Scudda of Justus League, Dahrio Wonder, APlus & Aagee (Compound 7) of the Heiroglyphics and Souls of Mischief and many more, and has earned respect for his outstanding drive and unique style.

The title “Heartbreaks” (release date: January 11th 2011), which will be the first single off the album “Matters of the Heart”, speaks for itself. It is based on a true story about being in love only to find out that it is based on lies and deceit. The Song captivates through its honesty and realness, as well as a distinct beat, produced by Kev Choice. This is not a song just for the ladies, it speaks to every person that has been through the Heartbreak.