A Dream Fulfilled... A Boy A Girl A Dream: Love On Election Night 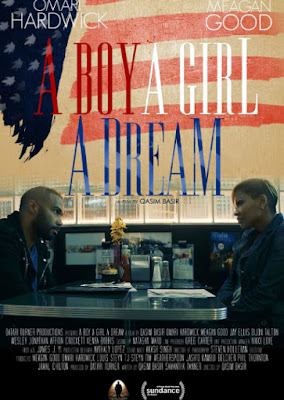 Fulfilling a dream can be frustrating, awkward, and murky in the beginning, like falling in love.  In one take, producer Datari Turner and director Qasim Basir recreate the beauty of vulnerability juxtaposed against living your dreams in A Boy. A Girl. A Dream. Love on Election Night.

Cass, (Omari Hardwick), and Freida, a.k.a. Free, (Meagan Good), meet on election night on the eve of the Donald Trump presidency. News clips and radio announcements during the film help fuel the anxiety centered around this news and the nervousness of the couple as they’re starting out. The mood of the film is grey and the interaction between Cass and Free feels uncertain and uncomfortable. Like layers of an onion, the masks that cover their fears peel off to reveal the love they wish for and the dreams they are afraid to covet. Hardwick and Good deliver a range of emotion filling silent spaces with unspoken dialogues. Basir does a wonderful job of moving through locations letting angles add to the color of the film.

At the San Francisco Film Festival Grand Lake Theater screening, Oakland/Richmond native Datari Turner, (Video Girl, Growing Up Hip Hop), revealed he was inspired to create a film based on data from a Washington Post article that found, there are only 13% of people who actually like doing what they do. Turner collaborated with director and writer Qasim Basir and brought the film to life with Samantha Tanner on that premise. Rehearsed many times leading up to actual filming, Turner says it took 13 takes to fulfill Basir’s dream of shooting a one-take film.

A Boy. A Girl. A Dream premiered in this year’s Sundance Film Festival's NEXT section and will be released by Samuel Goldwyn this fall. Watch the clip!