The Oakland Indie Awards celebrates contributions made by Oaklanders in the art, political, environmental, and community-based realms. The award ceremony takes place May 30, 2013 at the Lakeside Theatre at 5:30pm. Touted as "A party for locals by locals" celebrate with the winners  at the Kaiser Rooftop Gardens beginning at 6:30pm.

Black Pearl Entertainment clients are among those making meaningful contributions. Congrats to Baby Jaymes and Jonez Cain who are both nominated in the Oakland Soul category.

Baby Jaymes is and has been a contributor to alternative and urban music working with a number of Oakland artists.  His latest collaboration is with the legendary DJ Toure' of the Hiero camp. His own Whatever happened to Baby Jaymes? CD is making international news with the video Streets featuring The Jacka. 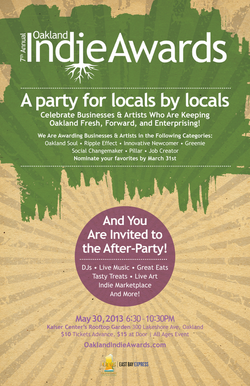