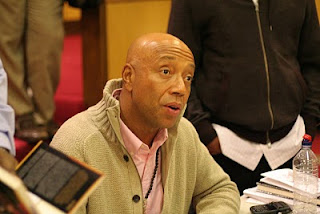 Davey D, well known political Hip-Hop DJ, moderated a fundraiser for the KPFA afternoon program Hard Knock Radio, (94.1 KPFA), with author and entrepreneur Russell Simmons. The Godfather of Hip-Hop created the careers of Hip-Hop greats Run DMC, Kurtis Blow, and others, and is known for his work at Def Jam and the clothing label Phat Farm. The event highlighted his latest book, Super Rich: A Guide to Having it All.

The hip-hop guru and practicing yogi shared his philosophies on politics, living in the hood, and giving. “Givers are getters,” was a theme repeated several times during the 2-hour interview with DJ Davey D. Simmons shared several living examples of ‘givers’ who have worked for him in the past, including Sean Combs, who he says brought him coffee before he even knew he wanted it. Simmons also shared that Kevin Liles was eventually promoted to President of Def Jam Records because he “gave until he could not give any more.”

Key takeaways from the evening were:

Work is Prayer. Do what you love until it becomes a prayer and success will come.

Students should find a smart student to emulate and enjoy your school work. You are who you hang round.

Be multi-cultural. Success has no color.

Evolve to a state of happiness. There are no needs when you are happy.

Even though we’re poor, (urban people as a whole), we can be connected.

Give until they can’t live without you.
Labels: Davey D Russell Simmons Super Rich