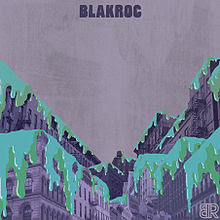 I happened to stumble across the Blakroc compilation by accident on Youtube, while listening to music at work. I came across their web series, Episode 8, that featured the making of the making of their first CD. I immediately fell in love with the infectious grooves of the organ and the catching rhythm of the electric guitar.

According to Wikipedia, after Damon Dash began listening to The Black Keys, who he says became his favorite band, he reached out to the musicians to meet in person. Dash suggested that they enter the studio with Jim Jones, with whom Dash recently partnered to form Splash Records. While recording with co-producer Joel Hamilton at Studio G, Mos Def interrupted the session, and ended up recording with them as well. With new artists being called in to work on the album, it was completed after eleven days recording.

Now mind you, I was listening to Blakroc's music thinking this was a new project and began searching the web to see what the release date was. To my surprise, this came out BLACK FRIDAY, NOVEMBER 2009!!!!

To know that I have missed out on this amazing, eclectic, funky, bluesy, music is UGGGHHHHH! I can't even describe it. To hear something so refreshing in this dry land of commercialized, repetitious, and stale place called radio, is like an oasis in the middle of the desert. I know I am being overly dramatic, but I just love this new sound and hope to hear more from Blakroc.

For more information on Blakroc and to view their Webisode sessions go to visit their website: www.blakroc.com. -a
Labels: Blakroc Damien Dash The Black Keys